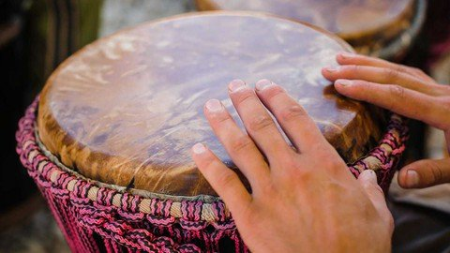 ​
Everything you need to know to confidently play the rhythm Djansa

Requirements
No prerequisites are needed to take this lesson

Description
Djansa/Dansa: For the Bner ~ Intermediate Djembe Drummer" Life is rhythm and we hold the Drum "How exactly does one solo on the djembe Are their specific solos per rhythm At what point does one improvise and how do we know if the improvisation is correct Here is your opportunity to learn all the specificities on how to play the popular rhythm Djansa. Course description:Section 1IntroCallx3 AccompantsSection 2x4 Rudimentsx6 accompant djembe SoloSection 3x5 solo phrasesUnison breakSection 4x3 Dun-dun accompantsDemonstration of all material OriginKita, MaliKita is a town and urban commune in western Mali. The town is the capital of the Kita Cercle in the Kayes Region. It lies on the eastern slope of Mount Kita (Bambara: "Kita-kulu"), known for its caves and rock paintings. Today, the town is known for its music, its annual Roman Catholic pilgrimage and its role as a processing center for the surrounding cotton- and peanut-growing region. Kita lies on the Dakar-r Railway and is the largest transit hub between Bamako (112 miles) and Kayes (205 miles). In the 2009 census the urban commune had a population of 48,947.[1]In November 1955, Kita became a commune of average exercise. On March 2, 1966, Kita became a commune of full exercise. The town grew in the 1990s around the cotton industry, but this has since declined.About the rhythm DansaThe primary Dun-dun phrase presented here ( played on the Sangban ) is part of the rhythm Djansa played in Kayes. There are many different sections and transitions to Djansa which they play in Kayes however the portion of the rhythm which we will focus on is called " Sandagundo " which is popular in Bamako, capital city of Mali. You can play the solo for Djansa on djembe however to be clear it is traditionally played on the Djeli Dundun. This particular dun-dun is a lightweight bass drum slung over the shoulder, the size of a Sangban but headed with goat skin instead of cow and played with a curved stick and Djeli Bell ( conical shaped bell held and played with a single hand ). The sound is loud with a considerable amount of attack. The Djeli Dun unlike your standard dundunba is a solo instrument with the same capacity and role as the Djembe.Jansali is the moment during the celebration when people offer gifts while expressing their gratitude or their criticisms to the hosting family. By extension people say " there is a Jansali in this family " to mean there is a celebration. It is probably the origin of the common use of the name Dansa.Binary Rhythm: each beat is divided into four partsSwing: In practice, the second and forth sixteenth notes are played slightly behind, creating a swingsimilar to the jazz shuffle. This swing is omnipresent in Dansa A note from the Doctor:Here's why drumming is good for you: Makes you happy. Participate in a drum circle or take a cardio drumming class and you will see how happy it makes you. Drumming releases endorphins, enkephalins and Alpha waves in the brain, which are associated with general feelings of well-being and euphoria. Induces deep relaxation. In one study, blood samples from participants who participated in an hour-long drumming session revealed a reversal in stress hormones. Helps control chronic pain. Drumming can certainly serve as a distraction from pain. And, it promotes the production of endorphins and endogenous opiates, which are the body's own morphine-like painkillers. Boosts your immune system. Studies show that drumming circles boost the immune system. Barry Bittman, MD, neurologist and President of the Yamaha Music & Wellness Institute, has shown that group drumming actually increases natural T-cells, which help the body combat cancer as well as other viruses, including AIDS. Creates a sense of connectedness. Drumming circles and group drumming classes provide an opportunity for "synchronicity" in that you connect with your own spirit at a deeper level while also connecting with other like-minded people. Aligns your body and mind with the natural world. The Greek origin of the word "rhythm" is "to flow." Drumming allows you to flow with the rhythms of life by simply feeling the beat. Provides a way to access a higher power. Shamans often use drumming as a means to integrate mind, body and spirit. They focus on the whole body and then integrate the healing at both the physical and spiritual level by drumming, which connects spiritual forces. Releases negative feelings. The act of drumming can serve as a form of self-expression. You can literally drum out your feelings. When held, negative emotions can form energy blockages. The physical stimulation of hitting the drums can help remove those blockages. Drumming has even been used therapeutically to help addicts deal with their emotions. Puts you in the present moment. While drumming you are moving your awareness toward the flow of life. When you are flowing with the rhythm of life you cannot be caught up in your past or worrying about your future. Allows for personal transformation. Drumming stimulates creative expression. When you drum in a group, you not only get to self-express, but you get feedback from the other drummers. It's the equivalent of talk therapy! Drumming provides a means of exploring your inner self, and expanding your consciousness while being part of a community. - Christiane Northrup, M.D.

Section 5: A summary of everything we learned in this course

Anyone eager to study how to play the djembe drum. In particular the rhythm Djansa