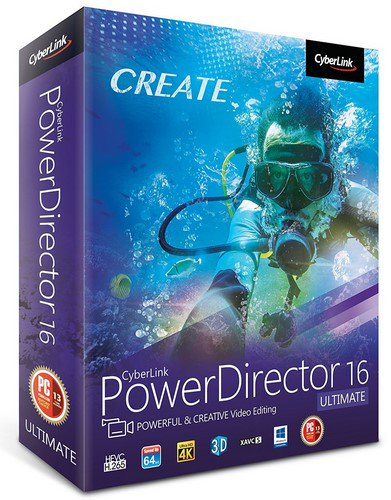 Don't take our word for it. Here's what PC Mag had to say, "PowerDirector is the fastest and most capable consumer-level video editing software for Windows around, and it's the first to support 360-degree VR footage."

Intelligent Color Correction (NEW!)
Color Match intelligently analyzes your video footage and adjusts lighting, saturation, and color variables to achieve a consistent look across an entire clip. It's perfect for video shot in areas of varying light or video taken from multiple cameras.

Express Color Grading with LUTs (NEW!)
Look-up tables (LUTs) are a useful and quick method that the pros use to match footage from one source to another in order to achieve a particular effect throughout a video.

Capture Scenes from More Angles
MultiCam Designer allows you to combine and switch between up to four camera shots in one synced video on-the-fly.

Disc Authoring & Online Sharing
PowerDirector enables easy disc authoring, letting you produce to CD, DVD and even Blu-ray. You can also publish directly to Facebook and YouTube to instantly share with friends and family.

Customizable Design Tools
Amazing travel videos are all about a story that people want to watch. PowerDirector helps you to do just that with great customizable tools that will have them looking just right.

View Designer
View Designer is a unique PowerDirector innovation that enables you to use 360-degree video footage in standard video projects. It's like you've filmed a scene with multiple cameras from multiple angles.

Creative Video Blending
Video Blending lets you merge clips on different timeline tracks to create a huge array of eye-catching effects that will bring unique impact to your videos.

Produce Vertical Video
PowerDirector has a design mode that lets you upload mobile video for YouTube, Facebook and Vimeo by removing letterboxing.